Bill Gates hits the bulls-eye in this open letter dated February 3, 1976. The line that strikes me the most is that "most of you steal your software. Hardware must be paid for, but software is something to share." Something that is abnormally common in India.

The complete letter (via LettersOfNote: 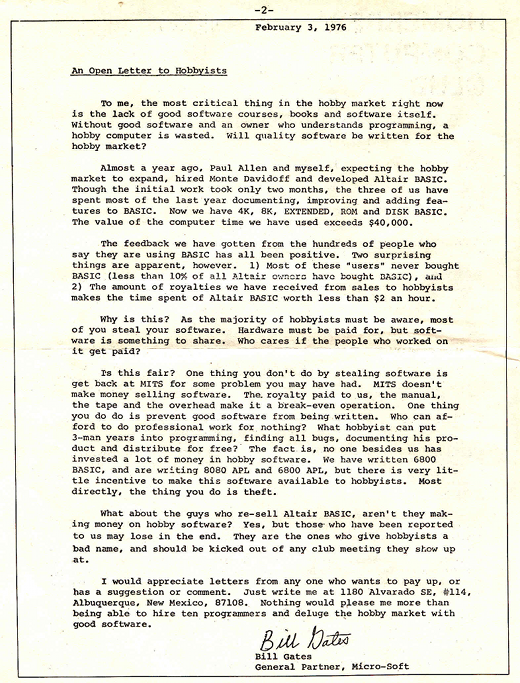 I now realise the perils of piracy in India. Being addicted to piracy, and getting mp3s and movies for free, we now assume the net to be free. Software is the last thing we like to pay for. And probably this is the reason why we neither have "good softwares being written" nor a Facebook or Google marked ‘made in India’.

Bill Gate's response to Windows Piracy in China, in 1998:

Although about 3 million computers get sold every year in China, people don’t pay for the software. Someday they will, though, and as long as they’re going to steal it, we want them to steal ours. They’ll get sort of addicted, and then we’ll somehow figure out how to collect sometime in the next decade.

That is actually what is happening now as all the laptops are preloaded with genuine Windows. The lesson can be summarized as:

Step 1: If you want to make a great software, and keep it alive, then make it paid.
Step 2: Don't lose the market. Those who can't pay, give them free and make them addicted.